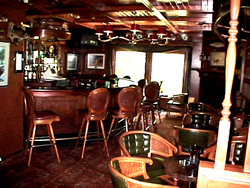 Rumors are rife that once upon a time, during the infamous prohibition fiasco, White Oaks augmented its celebrated cuisine by dispensing forbidden spirits. Not the bath-tub gin and needled beer variety that were rampant, mind you, but the authentic wares of distillers in Canada, Scotland, and France. In addition to this brazen liquor transgression, some hardy survivors of that era whisper that high-stakes gambling supplemented the whole ticklish operation.

In frank answer to these vicious innuendos, the plain unadulterated truth is that this doyen of restaurants was guilty as implied on all counts.

White Oaks opened its doors in 1928 and it became the place to be seen in almost immediately. The larder was always chock a-block and it was presided over by master practitioners of the epicurean art. The booze was ferried in from Canada nightly and it flowed copiously from dusk to dawn. These two necessities of the good life were further enhanced by grand-scale wagering, and it was within this sybaritic ambiance that captains of the industry, political hacks, denizens of the underworld, and sports and entertainment luminaries, mingled and rubbed congenial elbows.

In short, those were clandestine, but oh so tempting, times. The roster of White Oaks' patrons read like a Cleveland "Who's Who," and the proud names therein were frequently upstaged by a parade of national and international personalities. All who came sought solace, and all who entered accepted the humbling experience of being surveyed at the peep-hole entry.

For those who seek at least a modicum of documentation, take a quick peek at the existing door of the men's lounge. It, as its plaque indicates, was the original entrance to this long-ago oasis where parched, and the famished, and the jaded, once cavorted in carefree abandon.

The final truth is that today White Oaks continually strives to retain the fascinating mystique that has haunted it since it surrendered its youth some sixty years ago. Toward that end, only you can measure the success or failure of our efforts and we do cordially welcome your verdict.

"Bon Appetit, " from the staff and management of White Oaks

View our gallery of photos of White Oaks history, during prohibition through today.
Click on images for a larger view, then use side arrows on either side of the image to see the whole slideshow.
Come into the restaurant to see our history wall of photos from White Oaks early days during Prohibition.